Okay, so I finished my first playthrough! I've had a lot of fun playing, and cannot wait for more

It's getting late here and I'll experiment with different choices later. Let's see if I can remember all I wanted to say, haha.

I really enjoy the flavor text that comes with the different personalities and roles/actions/relationships you've got. My character was scheming and lazy. I had a lot of fun most of the times when he suddenly went all *smirk* and said something scheming! Lazy... he did complain about waking early, and the council being a lot of work, but after I decided to join anyways I never saw lazy again. Did my character unlearn being lazy because of his life choices? xD There wasn't much of 'lazy'..

I was trying to go for William and I maaay (?) have succeded well in getting a good relationship with him. I went a bit 'whoa' when MC went all scheming when he asked for help with Ellen, but then he didn't look displeased when I talked about getting closer to Damien just to play him (?) So I did that and dumped Damien later >:) so.. it still went well? I thought we still interacted a lot and I'm not sure being co-pres removed some scenes. I helped him pick a present, we also went to the play and he told me more about his past, and at the end when he got the stinkbomb we had a talk in the cafeteria with each other. So am I or am I not on my way to be able to choose his route?

I did find the dungeons frustrating to start with (cue all my posting here about them ^^;) but I refused to give up and managed them all

it got easier, and the last was the easiest for me. I never realized it was a little randomized until I restarted the abyss and fell into a hole where there wasn't one before xD I guess it's because I used different save points. Here I did get some save file bugs which I uploaded.

I got over 80 in blue and used the blue charm starting after 2nd dungeon. You can't fail when you got the token? I was able to boost it a lot.

I'm really looking forward to when we'll be able to collect achievments. There's already a lot of fun stuff to find

Some finalish thoughts now that I am pretty sure I've seen everything story wise. I love the use of the spell spirit echoes to find out how to use the teleporter that was a very clever use of that spell. I honestly didn't think it would work, but it did. I don't remember if this was mentioned in the first game but I had a good chuckle that raven and suki are room mates. There has to be a mini spin off game all about those two and how they drive each other mad, it has to happen

. Also I knew that the secret santa gifts were not random darn you crafty potsdam

. The new sprite of minnie and her swirly eyes is the best sprite hands down, sooooo adorable. Just reading about her work obsession makes me tired, girl needs to learn about meditation or something jeez.
Top

I don't know - all I know is that I clicked "continue" in a box and the next thing I knew was that I fell into a pit and failed the exam.
My game reviewing blog.
Top 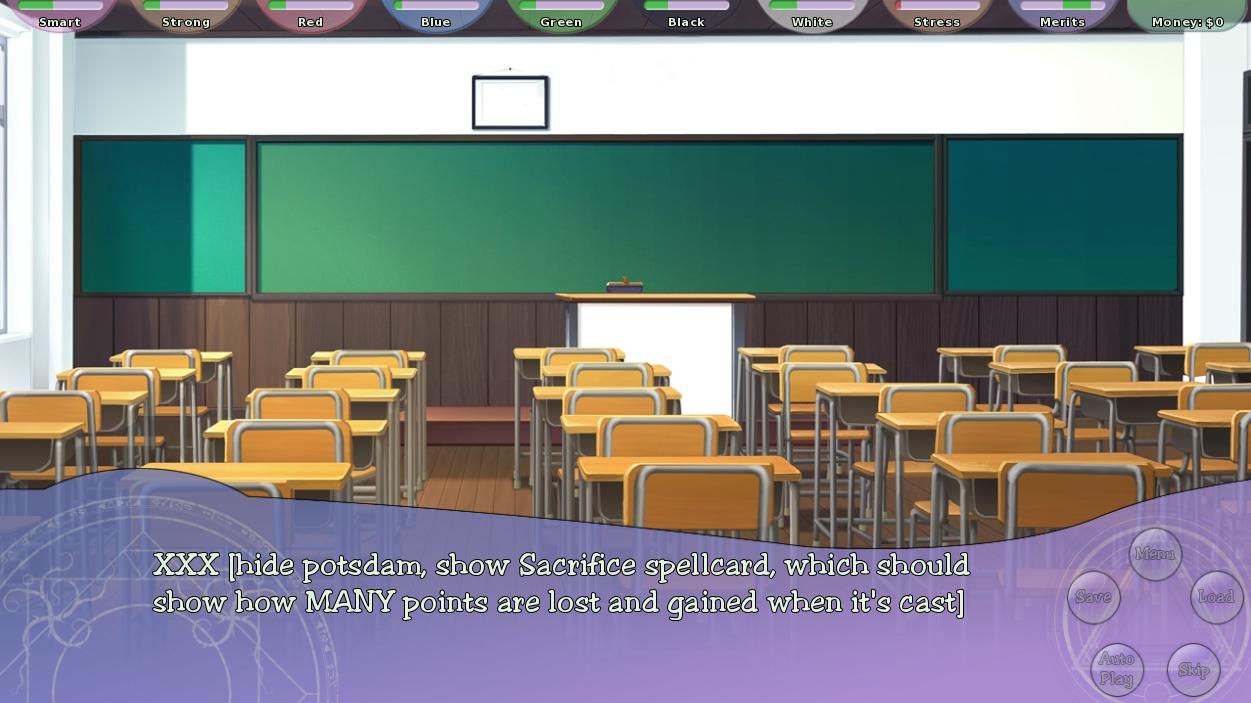 I noticed what is probably a minor bug:

During an exam, if you repeatedly cast sicken on yourself until you pass out, you will get in trouble with Grabiner. BUT if you first cast boost strength on yourself, then cast sicken a few times, and then pass out after the boost strength spell ends, you will not get the scene but instead just skip any pass or fail scene entirely.
Top

Okay, I really really like Minnie and Barbara both so far, I haven't gotten to do much of anything with Ellen she seems to progress more later, as in post new years probably. Damien also gives me the chills, I figure he only finds you interesting after learning you're William's freshman. William also I can never tell if is actually interested, again likely due to it only being the first few months. I can't wait for all the CG. The backer/voted romances are probably happening last yeah? Also when will we be doing the voting?
Top

This is not at all a gratuitous post to share the new Blaise icon I just whipped up real quick!!

EDIT: It sure would help if I... actually put the image in the body of the post...

I don’t think I’m going to post anything that hasn’t already been explored or said, but here’s my two cents for whatever they’re worth!

Didn’t run into too many bugs throughout the game; only one when studying poetry in the library and seeing Raven browsing the books where the script repeated itself a couple of times, and then another time where the game sorta blew itself up when I went to check on Barbara after the Dark Dance. Reported both of them.

As far as the dungeons, I was able to understand them after a few tries, and I myself am not the best or smartest explorer. However, I do think that anyone who has not yet played a MD game or isn’t familiar with dungeon crawlers would have a significantly harder time. The puzzles were difficult enough to be a fair challenge, but I liked the first game’s approach to the very first dungeon, just putting one puzzle in front of the player and testing their wit on how they would hypothetically solve it, not expecting anything more than a good effort. This approach at least introduced deeper thought into how the pentachromatic system is supposed to be understood, where the study hall with Professor Grabiner barely touched upon it. I imagine it would seem silly to expect nothing from this particular MC, of course, but taking the player into consideration, the first dungeon was just enough to be a little overwhelming. It WOULD be interesting if these tests are purposely made so that wildseeds’ dungeons are easier, though I don’t think that’s the case.

Overall I loved getting to know all the old characters from Horse Hall, and meeting the new ones~ I was especially excited to see a genderfluid character playing an important part in the game. I can’t wait to see the new teachers and student cameos~! XD

If I could make any suggestions, I would love to see a text log in the toggle menu. I have a hard time with reading comprehension sometimes, especially if I’m trying to focus on text AND pictures/sprites at the same time. With other otoge I play, being able to toggle a chat log and re-read the current scene’s text in script form without having to reload a save file or rewind five minutes of gameplay helps immensely. I think it would help make things just a little bit more accessible.

I’ll be replaying the game a couple of times to test out more options and such, hope my input helps!
Top

vague silly curiosity: What was people's preferred way to deal with the pie?
Top

Thus far I’ve only agreed to distract Ellen twice (versus distract Damien or stay out of it), and I claimed credit for the pie both times. Partly because I love Damien’s reaction to being called a liar lol! I haven’t yet tried fessing up to Ellen after the dance though... might do that on my next playthru!
Hi, I'm Chesh. They/them pronouns, please. 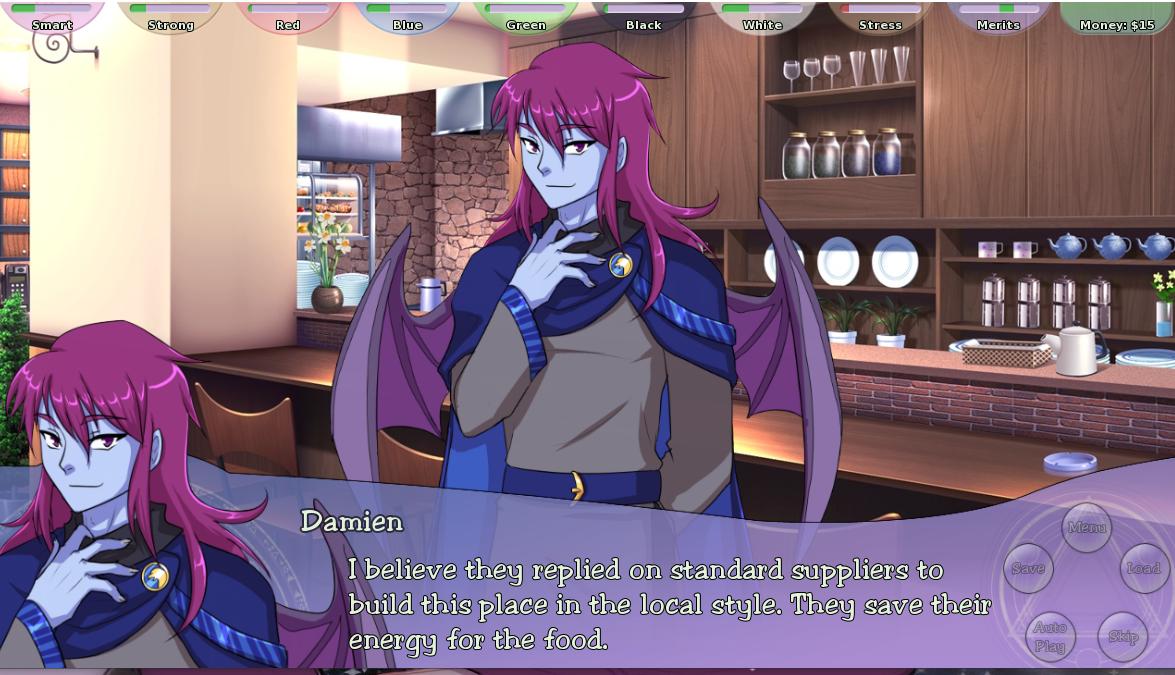 Found a typo! I believe that should be "relied," not "replied." ^^
Hi, I'm Chesh. They/them pronouns, please.

I tried giving it to Ellen myself, but felt so bad I had to confess to her.

Actually, after that, she didn't ever bring it up again, but seemed on friendly terms with me. Did she forgive me, or is she just repressing it...? (Now I feel even worse for her...

The second time, I seduced Damien myself... and I feel far less guilty about that.

Sort of more general subjective feedback here, but trying to play the MC as introverted-but-studious doesn't really work - making choices I would consider the best option for an introverted and/or antisocial characterization tends to get the "lazy" tag, as if that's the only motivation for not wanting to hang out with people or do the Initiation stuff!

Of course, I know that given the MC has a more concrete backstory this time around, it's not going to be possible for the players to have too much flexibility in shaping his personality, but imo at least, I think having the option to start off as a genuinely aloof person instead of a lazy option would be more fun. It also kind of stings a bit as an introvert myself to have what on their face look like introverted choices be branded with the heavy negative connotations of "lazy." ^^; But once again I know that's an incredibly subjective reading of it, lol.
Hi, I'm Chesh. They/them pronouns, please.

You can also find me on:
deviantArt
tumblr
Twitter
Top
Locked
588 posts