Princess Debut On your DS!

For discussion of games by other creators such as Aveyond and Spirited Heart.
Post Reply
9 posts • Page 1 of 1
Message
Author

Princess Debut On your DS!

A Kawaii new game called Princess Debut is coming out for the DS September 30th!

Hooray it is a Rhythm game like Elite Beat Agents. You get transported to a magical world and swtich places with a princess. So you must no become like a princess. With Princes, Royal Balls, and 14 Endings it sounds like I may be picking it up!

Natsume is doing the English Localization so I can trust the Harvest Moon people to do a good job. 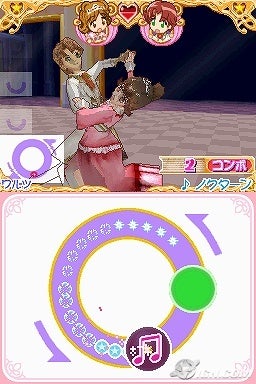 The wolf and his mate howl, taking solace in the silver moon. Pressing ever foreward to see what the future holds.
Top

If you get a copy, let me know what you think!

I'm sort of holding off for the moment because I did buy the Ice Princess game and found it... boring... I don't want to buy another game I end up not playing.

It looks really cute, but I hear the dancing gets too easy very quickly, and I'd love to know if the writing is any good.
Top

Well, I hear it's good if you're into Japanese stuff and can suspend disbelief.

It's apparently very cutesy and either very charming or very what the heck is this?!. Then again, it is Japanese... I did a quick search on the game though, and it seems the love sims element and storyline is a lot more prominent than I thought.... And the graphics look well-done. Hopefully, even if the dances are redundant, the guys and story keeps me liking it.

Thanks for telling me, Jinroh! My new DS and Wii just gave me a lot more gaming options, and I'm splurging. Soon as I can, I'm running out and buying Phoenix Wright's 2 games (got Apollo Justice down), all Square Enix's, and both Zeldas and Okami. If I can find this game, I will definitely be picking it up too. It looks like it has nice replayability.

@Hanako: Are you talking about the Imagine Figure Skating one, also for the DS? Just a tip. Don't touch an Imagine game with a 10-feet pole. They suck.
Top

It was originally a Japanese game (Kuru Kuru Princess) and not something they wrote just for the 'Imagine' line, so I had hopes for it, and there are some good things about it (the characters are awfully cute, and the skating's not that bad, and as you guys can probably tell I *like* figure skating), but... If the localisation team hadn't tried to make it "cuter" by adding some really annoying voice-overs to the skating parts, it would be passably okay. As it is, I can't recommend it. (According to mainstream reviewers, it's still the best game in the Imagine line...)

At the moment, I'm leaning towards picking up Princess Debut but I keep convincing myself to finish some of the games I already have first. There's a lot of DS games I want to play! ... Oh, I give in.

I have this and I enjoy it. You'll like it if you enjoyed certain parts of Rhapsody, and Princess Maker. It's very cute, but then again I * heart* the cuteness, and entertaining.
Top

I have this game and I have been playing for some days.I like it A LOT.It has a really cute storyline and the main prince caracthers are REALLY handsome (at least,I think so xD). But it's a short game.You can finish in 4~5 hours.

And the dance does tend to be a litlle tedious after some time,specially if you have already reached the master level (level 20),but you still needs to go on practicing at least once a day. But I think it's worth it.
Top

For anyone who DID like Imagine Figure Skater, the sequel (Japanese: Yume no White Quartet) is due to be released as Imagine Ice Champions.

Not out yet, though, and I have no idea if it improves on the first in those little annoying areas.
Top

Oh this game is really cute, I enjoyed it.

This game was flippin' awesome! I was a little embarassed to buy it since it's all cutesy and stuff, but it was well worth my ego. The dancing part is easy, but you also find yourself wanting to beat your scores so you keep playing. There are tons of costumes to collect, dances to learn, and the dating sim element was tons of fun! There are a lot of little senarios and all the guys are charming in their own way. I played the heck (I actually unlocked everything which is rare for me) out of this game and I would totally recommend it.
Top
Post Reply
9 posts • Page 1 of 1