The boulder error message (this time from a Saturday in the dungeons):

Examining will help you find the secret door in the first place, but you'll need spells to get it open.

Since the Sparkle is *supposed* to go down into the floor where the door+vines are and disappear, this is meant as a hint that you should use your spells on the floor.

To be more explicit, cast Inspect on the floor in front of the secret door.

Then Examine the floor again and you should now be able to use it.

(We're currently trying to fix the Sparkle bug and add more hints when you Inspect the wall but that won't be patched for a little while yet.)
Top

Same - I used breeze this time, found the wall, inspected it, discovered it was fake, but I couldn't find a way to open it or go upward (or even to LOOK upward). The light happily hovered at every location I examined and had full health, but that was about it.
Top

Error when I cast crush on an abyss:

and here's the one from Track Scent:

When you get these exception type tracebacks, the best thing to do is to click the Upload button at the bottom. That will transmit the error directly to Spiky along with information on exactly where you were and what you were doing to cause it (making it easier to trace).
Top

I enjoyed the current game a lot. Regarding the exams: I didn't really have much trouble with them (I was unspecialised, and generally managed to get each new set of spells the week of the exam), but it often felt as though there was only one correct answer. (I mean, this would back up Ellen's complaint, but when the spell we learned specifically to deal with poisonous gas has no noticeable effect, it does feel a little off.)

I do have a complaint regarding the "flirty" stat, as it seems to assume heterosexuality whenever it's used automatically. By which I mean, "flirty" interactions with girls are flirting, and "flirty" interactions with boys are talking about girls. This even though I had only ever chosen "flirty" options when talking with other guys. I realise that a "What's your preference?" choice can be kinda immersion-breaking, but seeing my character avatar flirting with girls even when I'm trying to play him as gay is also pretty immersion breaking.

Not sure how to upload this as a bug since there wasn't an error, so I'll just describe it -- I got a duplicate of the post-Dark Dance Barbara scene by visiting the dungeons twice in a row around the time of the dance. Same dialogue and so forth.
Top

A grammar-related crash ($Vines is not a valid text tag) in some interactions with the vines in exam1 fixed.
Inspecting a certain place in exam 1 now gives you more informative feedback.
The sparkle in exam1 now moves to the correct destination, does the thing it's supposed to do, and most importantly doesn't grow an extra action for every turn it's done something.
Unused old versions of a bunch of sprites pulled out.
Some of the giant pile of console messages have been trimmed.

The call stack bug is likely to be an interesting problem (WHY does it think things are being called from .rpyc files in lib/windows-i686/, anyhow?)... but at least I finally have a test machine that replicates it, so I can poke more. I'm guessing at the moment it MIGHT be a weird interaction with Itch sandboxing but that is just a guess.
Top

I managed to successfully pass all of the exams on the second playthrough. This time I focused on getting Barbara scenes, and they were REALLY endearing.

I was curious if there is a way to pass the poison gas exam without the push spell, though, since I thought I remembered seeing somewhere that it's possible to solve the dungeons even if you choose to specialize in 1-2 colors. But I might have just remembered that wrong.
Top

I wonder if you might want to consider changing the introduction and description of the Breeze spell to harmonize better with its in-game use. It's originally kind of explained as if the spell will blow a breeze purposefully in a specific direction, but in practice it seems like it usually functions to summon a breeze that chooses its own direction and that direction provides a hint as to where the exit might be.
Top

I got a weird message when examining the boulder and pile of rocks in the second exam:

And I also seem to have triggered two copies of the same event: 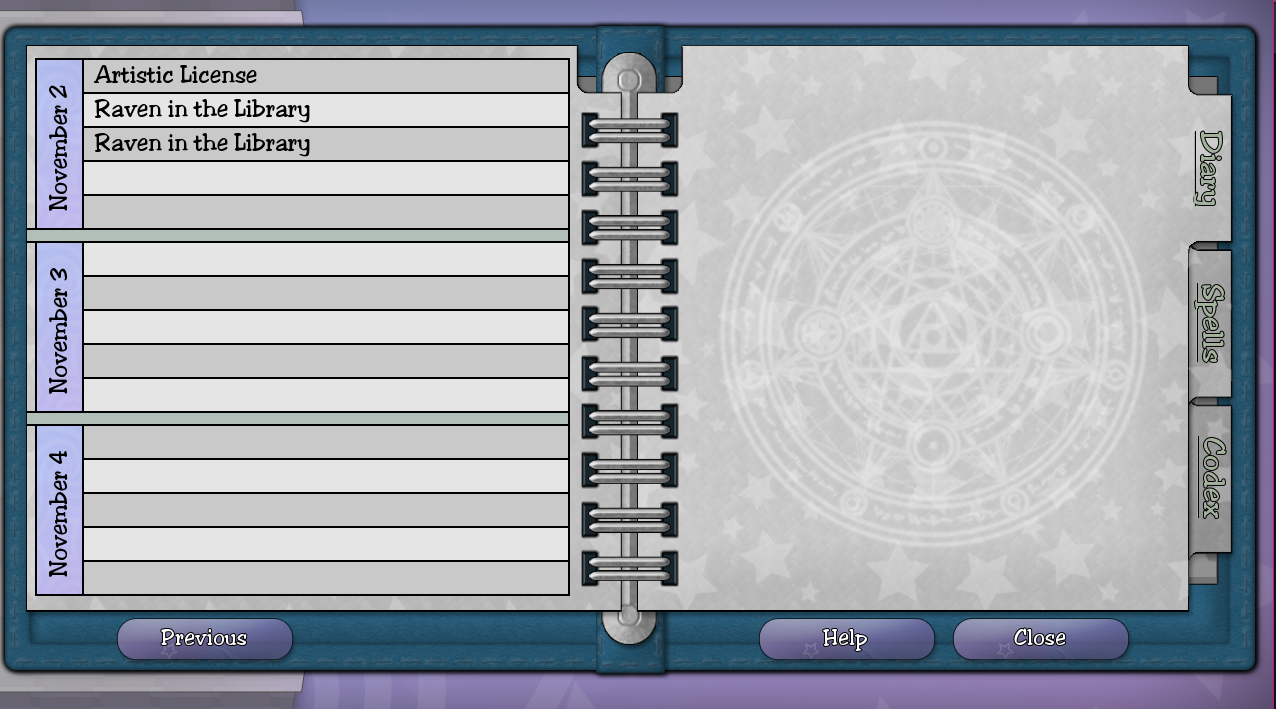 Love the game so far, has all the charm of the first game. You even managed to get an audible gasp from me when Minne commented on my focus of green magic for tutor help. All the little touches really make the magical diary games come alive.

As for the exams so far, as a green mage, the first one was easy, although I failed during my second play through. Quit acting like I should have known what to do grabiner

. The exam with the abyss tiles seems too hard or too narrow in ways to approach for so earlyish in the game. First time I failed utterly and during my second play though I only won using dumb luck (I blasted a random wall tile twice and it opened a way past the holes) . I still don't know how to interact with the hidden blue ring. The poison gas one I just powered though with the hp up green spell, although It wore off and I "died" so, that is my fault, whoops

Story wise it is still great. I don't really have much to say other than I love all of it.

bug wise I got quite a few of them, most seem minor though. I got the same bug someone else did, where Barbara talks about what happens at the dark dance twice. A big one I got is during the presidential race, Both me and Minnie are the co-prez and ryu is all "You flirtin with my woman" and saying that you are (I gave him advice about her in the gym earlier), a few text blocks later kicks me to the main menu. Granted I ignored I few bugs about fade in transitions right before that, so that may be what is causing the issue.
Top

We're getting some weird bugs that seem to have something to do with using Itch (which we're new at) and have no idea what's up with that. Call stack related bugs (which throw people back to the main menu) currently only seem to happen in the itch build - the same game version outside of itch works fine on the same saves. Figuring that out may take a while.

Has anyone been experimenting with the color charms from the mall yet and seen what they do?
Top

jellybi wrote: ↑
Sat Mar 16, 2019 11:57 pm
I was curious if there is a way to pass the poison gas exam without the push spell, though, since I thought I remembered seeing somewhere that it's possible to solve the dungeons even if you choose to specialize in 1-2 colors. But I might have just remembered that wrong.

The only specialisation that can't pass that exam is pure white. It can be done with red, blue, black, green, or blue+white combined. (Much like exam 2 in the first game, for similar reasons, even though the puzzle's different

) Pure white can get through the exam with the holes, though.