Still vaguely debating whether I should stick to the exam schedule from the first game or adjust things to add a test for November.

Which would lose the evil 'Welcome back from break HAVE A SURPRISE EXAM' effect, but space the tests slightly better.
Top

hanako wrote:Still vaguely debating whether I should stick to the exam schedule from the first game or adjust things to add a test for November.

Which would lose the evil 'Welcome back from break HAVE A SURPRISE EXAM' effect, but space the tests slightly better.

Since it's technically the same year but 'alternate' wouldn't it be better to keep it the same? It would be a fun easter egg for those of us who played the first, I think. And everyone new would still be surprised!
I've been here so long even Hanako is sick of me
Top

Probably, although the exams are already different anyway (as it wouldn't be much fun to play the exact same puzzles) so.
Top

In that case, you might as well change the spacing of the exams to fit whatever you think would be best for the story and/or gameplay. I mean, not everything will be the same anyway because the actual puzzles are different, so maybe the teachers decided to change around their exam schedule to better fit which puzzles they expect the students to be able to solve at a given time of year?
Top

Personally I'd miss the curveball, but I also think long-term pacing and game balance is more important in the long run.
Top

What I'm considering doing is moving the January exam to be on the Monday rather than the Friday of the first week back so it would be a different surprise but still unexpected.
Top

Currently at the point in November where Ellen gets the Bad News and Damien takes his favorite freshman on a dinner date. (Both things that work a bit differently now of course.)
Top

Should be intriguing to see what the differences are once the game comes out. Can't wait!
Top 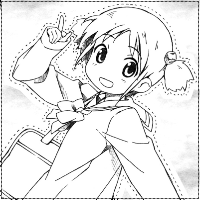 But I'm afraid there is one other thing. You haven't been broadening your magical palette as much as you could be. I know you're capable of more than this, Hanako...

Can't remember if I ever showed you guys this, but WAY back all those years ago before we changed artists for the characters, we did start making full sprites for some characters who had only used the character-generator in the first game. This was one of Minnie's poses in that original style: Obviously not quite what she looks like now that we've changed artists, but might interest someone.
Top

That image of Minnie makes me wonder what inspires your art direction between games, actually. Do you have an artistic preference for characters, or do you tend to adopt the style of whoever's drawing it at the time? Take the differences between Suki from Horse Hall, and what we've seen of Wolf Hall, where you seem to have gone drastically more "western" and realistic in the style.

On a side note, the house-themed clasp/slide is a cute addition to the uniform

a lot of the time it's mostly down to "who's available" because I don't have a staff artist.

Unfortunately the Wolf Hall sprites were made YEARS ago by an artist I haven't been in contact with in ages, so I may have troubles when it comes to trying to do CGs, if I can't reach her!
Top
Locked
153 posts