by Queen's prince
My favorite early game strategy is to serve to Elodie's name... In translation Evil-lodie :3
However, it's not my most used one, since I have only 15 achievements unlocked

by Gamer
So I somehow migrated this game to Steam. How can I accuse Uncle Laurent for an attempted assassination without being a Lumen? I know I've done it before and I don't know if anything has changed since the last update.

by Gamer
Can anyone help me find a way to accuse Uncle Laurent for an attempted assassination without being a Lumen? I started playing this game again so I've become a little obsessed. Haha.

by somestrangecircus
You get the option to accuse Laurent of treason if you face an assassin in Week 16 and can then decipher the coded letter that they leave behind, and it says that the assassin came from Merva. It's possible for this assassin to be from somewhere other than Merva though, if I recall correctly.

(Someone correct me if any of this is wrong; it's been a while since I've loaded this game up.)

by hanako
Even I would have to look it up to be sure but - I think in order to trigger a Mervan assassination attempt without being a Lumen yet, you would need to have found a reason to write to Charlotte. Which would require that Elodie gets bitten by the snake and healed by Charlotte, then maxes out meditation enough to get the 'glowy' effect, then talks to her Lumen mentor about these mysterious non-Lumen powers.

But this is off my memory.

by Gamer
I believe you need the crystal (hence become a Lumen) and have high meditation to write to Charlotte.

Could you falsely accuse Laurent of sending an assassin if Banion sent it after you instead? I tried that as well but didn't work.

by hanako
Okay, I had to dig for this. What should trigger the possibility to accuse Laurent without being a Lumen:

If all that happens, she becomes suspicious of Laurent and has the option to accuse him.

by Gamer
It worked. Thanks!

by KitCat
At time at demo, i succes only these thinks well, when i debug... without it, i only can select what is most needed succes...

And yeah... at even that time that saddest end be possilble...

by Gamer
Hey, I read in LLTQ wikia that you can get Julianna to vote 'no' at the ball if you get the crystal and refuse to accept it multiple times. Is this true and if it is, how do I achieve that?

I don't know if anyone's actually ever done this, though!

by MillaMaxwell
I just tried it and confirmed that it works: 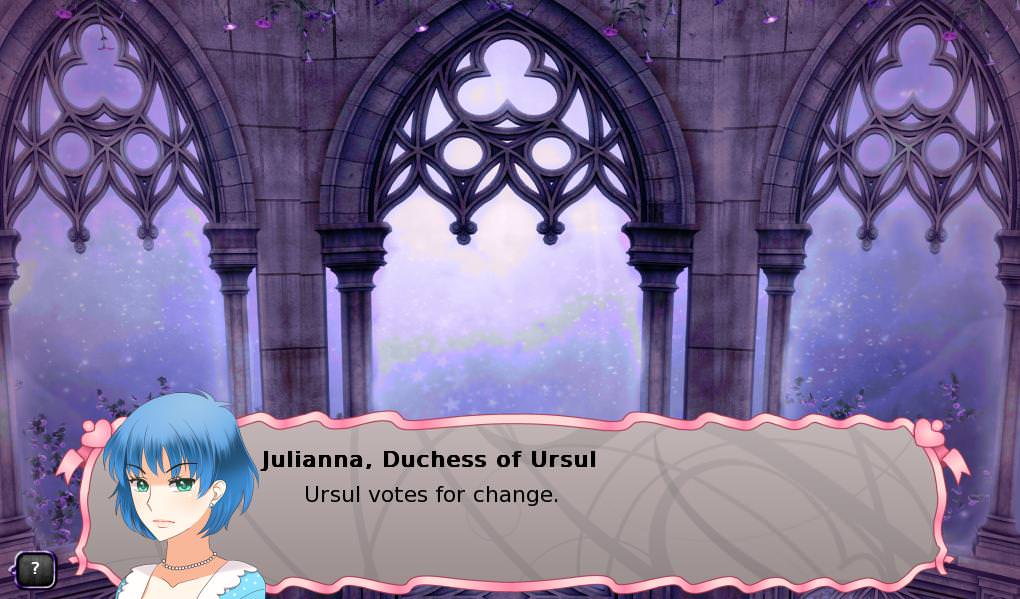 This resulted in basically only Joslyn and Armand taking Elodie's side. When I tried again and specifically aimed to improve noble approval (and didn't invite Talarist to the ball), then Severin joined Elodie's side too. I don't think it's possible to have the voting scene and then win the game without Julianna's vote.
All times are UTC
Page 2 of 2
Powered by phpBB® Forum Software © phpBB Limited
https://www.phpbb.com/